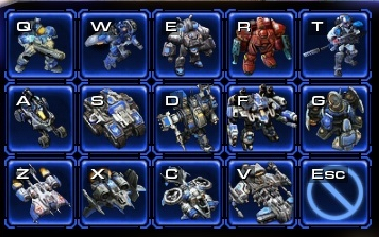 Terran is the most diverse of the races and contains strong counters and healing units. Terran also posses the strongest early game unit, firebats. Firebat coupled with sentries and/or roaches provide a very strong opening. An early bio push, firebat/marauder/medivac with roach/sentry can be game ending. After pylon terran players can focus on using their strong counters or forcing a counter by massing tanks or banshees. Dingles and Medivacs are useful healers. Commandos stun opponents. The major disadvantage of terran is its weak very late game air units.

Because of the upgrade mechanics in NW, Marine DPS is second to Carriers (supply for supply). Every attack upgrade increases their attack by +2, meaning their attack doubles at the third upgrade. That's roughly the cost of one Battle Cruiser, a relatively useless unit.

Anti-light infantry unit. Detector. Strong early-on, but loses efficacy quickly. Good against early light units and sentries in one lane. Not effective in two-lane play though.

Can Cloak when researched. Cloak consumes no energy and is permanent.

Commandos have the stun ability. Commando/thor is the a very powerful combination when engaging mass scourge strategies.

In one lane ghost/commandos dominate the game. It is not uncommon for players to mass ghost/commando especially when playing zerg opponents. This is hard countered by AOE attackers, storm assassins and colossus. But the extra income given from ghosts allows for a very strong transition to Dingle/Mothercore/Carrier which is the most powerful unit composition in the game especially against mass colossus.

☀Should never build more than one.

Mech timing attacks based on upgrading before 900 pylon can be game ending, especially when coupled with immortals or ultras.

Middling with tanks is very powerful and common.

☀Personally, Warhounds are my favorite unit in the game.They are definitely the most underrated

Heavy mechanical unit. No major weaknesses. Very strong against scourge. Thor is the best all around ground unit in game.

Remember Thors get countered by Warhounds.

Flyer which heals friendly mechanical units. Great when you have air control

Should never build more than one.

Cloaked Air to Ground attacker with high DPS. Can be very strong situationally.

Good Ol Desperate Banshee (GOD B): desperate times call for desperate measures. If you're getting hard pushed by a heavy ground opponent who lacks air detection (mother cores for example), start middling banshees. It'll force your opponent to awkwardly get out not only AA, but also air detection. This can buy you time to get back in the game. After forcing out air units, you can do really well by tech switching to Thors.

Never build them. Repeat after me: "NEVER BUILD THEM".

Retrieved from "https://sc2nw.fandom.com/wiki/Terran_Units?oldid=4261"
Community content is available under CC-BY-SA unless otherwise noted.